I decided to be adventurous tonight, I had a few leftovers I wanted to use but nothing else readliy available so I made a mini fritata in the blini pan.  I think they're selling them as egg pans these days, it's basically an itty bitty frying pan, but I've been meaning to try making a little fritata in it for at least a year now.  I'm pleased to say the experiment worked out!  Perfect bento size.

I also decided to make gyoza. I had some pork filling left over from making nikuman and a bunch of dumpling wrappers I'd yet to try using.  The last, and only, time I made gyoza was 3 years ago and I was being supervised by my Japanese teacher.  I think I remembered how but they're far from perfect.  Hopefully they'll still taste ok.  Apart from those there's a babybel, some edamame, a few chicken nuggets and a homemade chocolate pudding along with two soy fish and a strawberry gummy.

Now that my summer job is over and I'm back at school, I have little reason to make packed lunches anymore. But I was feeling tired and scattered and wanted to do something small and satisfactorily creative without the pressure of taking on a large project, and so I made two twin bento lunches for myself and for my roommate (who packs lunch half of the week anyway) to eat tomorrow.

This is admittedly one of my lamer bentos. But I had the stir fry as leftover from dinner, and a long time ago, I froze a portion of rice in that thermal container - so it was a fairly easy one to make. Well except that I spent an insane amount of time speculating over WTF I should put in the last container. That's why it's rather.. blah and unhealthy. But well.. sometimes it's ok to make a "snack", too :)

It was my friend Megumi's birhthday over the weekend and I made her these.... Squishy Onigiri :D
She LOVED them! YAY ^_^ **Moderators please remove if it does not comply with the rules. thanks * I have to make my own meal so I try to make cool stuffs ! (Not stuffs like Onigiri or anything else, I just decided to cook more ! =D)
So, on the top there's homemade feta Samossas (I don't know the english name. We call it Bricks in france).
On the right, carrots, gressinis and cheese ("Caprice des Dieux", I love it *_*). On the left,white and blake grapes.
Have a nice day !
Léa.

i never work mondays, but i had to work today for the holiday. i threw lunch together in like 3 mins when i remembered i needed to go to work >.>

bottom is a small can of tuna (ugly but yummy /sigh) penguin with mayo standing on more champagne grapes, and rosemary crackers.

I haven't posted in a looooong time, but since school has started back I have been making bento lunches for my 6 year old daughter. 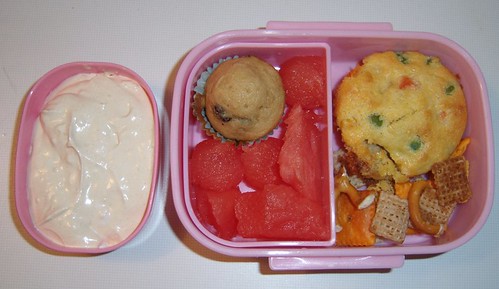 made this 1 week ago for my friend. it was her birthday :)