I'm quite pleased with my most recent purchase. I placed an order at Bento Crazy on Monday and received it today! I got 3 nesting Monokuro Boo boxes and the matching oshibori and case. Love it all and the customer service is awesome. She also included a few extras--a star food pick (I adore stars!), a fish sauce bottle, & some green grass food dividers. We Cajuns call that "lagniappe". Everybody loves a little something extra! :)

( Collapse )
My husband and son are in Ireland (it is the first anniversary of my MIL's passing so they went for the memorial mass).

I have been struggling with health stuff yet trying to keep some normalcy in my schedule and trying to get out regularly.

Today I made a bento to take down to kayaking - where I help manage getting folks out into the kayaks and do shore support.

It is in a nice sandwich box I bought from Bento Crazy - it is longer than other sandwich boxes I have.

It has some almonds in the orange case, hummus in the green one, some raw carrots and some Tandoori garlic naan from Trader Joe's.

I haven't done a bento in a long time, but was recently motivated to get back into it after getting sick of a) midnight McDonalds runs since I work from 7 p.m.-5:30 a.m. and b) frozen dinners. This is fluffy fried chicken pieces, cherries, strawberries, sakura shaped pineapple, sauteed zucchini and onigiri made from brown rice. Maybe I made it wrong, but it had a texture way different from white rice. I wanted to try it, and I'm not too sure if I'm a fan of it. The nori face punchers are fun, but my nori piece started to get a bit less stiff due to the humidity in my kitchen. So it was near impossible to get them to work, lol.

This was today's lunch. I have forgotten how much I liked making soboro for bento. Easy and delicious. I was about to put the soboro on top of the rice, as one would for a soboro donburi (rice bowl) but then figured that it looked nice on the side so that everything was clearly presented. 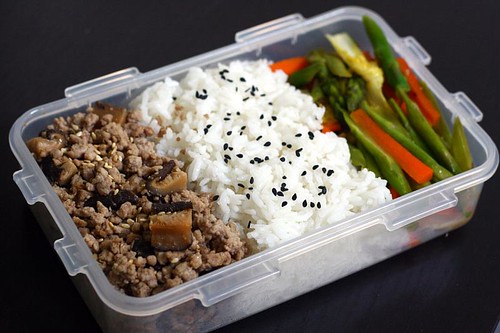