OK so this is mostly a Leftover-bento. Which means I had to work with what I had - the pasta.
Also I don't know what happened to my photo, it was wayyy dark (all the approximately 10 pics I took of this one) so when I'd Photoshopped it into acceptable lightness, it became rather grainy. Apologies for that.

(side note: My kid ate everything BUT the quail egg man in yesterday's bento. Much to my surprise. But it was better than I'd expected *L*=

Well, I thought I should finally post something, so here goes. 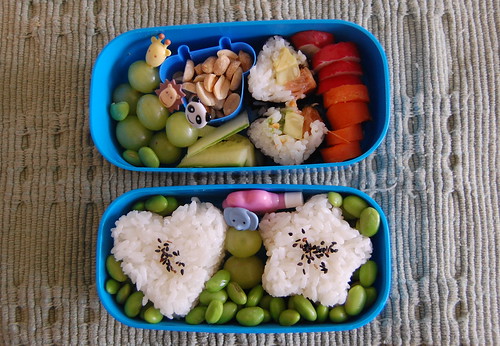 Nothing too fancy, but hey - it was a delicious snack!

I discovered bento last year, when I was talking to someone about making cloth wrapping paper (to cut back on the waste of using paper), and they told me about  "Furoshiki' - when I googled that, I found bento!  I was hooked straight away.

I work from home, so while I keep meaning to make bento for myself when I do my daughter's..... it never happens.. so at the moment I only make kids bentos.  And pretty plain ones... since I hate mornings :) I really should make an effort to make it for me too. I like to focus on vegetables, since I think she gets enough carb and protein from breakfast and dinners... and I know she's had her veggies for the day :)

Annoyingly after spending $20 on egg moulds, she won't eat boiled eggs (not even pink ones!)... so those are going to waste... the only other cool bento thing I have is a set of picks that can make tomato balloons :)  (which I'm scared of losing, so I don't use them much).

So... this morning's bento

I'm using a "fit & fresh" lunchbox.  The bottom level has carrot, star shaped mini ham & cheese pizzas, "cherry" tomatoes, Cucumber, cubes of beetroot and my first ever moulded rice!  (which was not eaten, so I won't bother making that again).  Then there is a container of apple, and some cinnamon wholemeal  (sugar-free) "pikelets" (mini pancakes)


Previous bentos I've done.  These were when my daughter was in preschool and I used a different lunchbox:

A bird made from a slice of apple, carrot stars, cheese hearts, cherry tomatoes and podded peas

And this was my first ever bento...

I do no like mobile phone pictures. But I didn't get a chance before work to take a picture so here we are. It was too cute not to take a picture. This would have been very appropriate for valentines day. 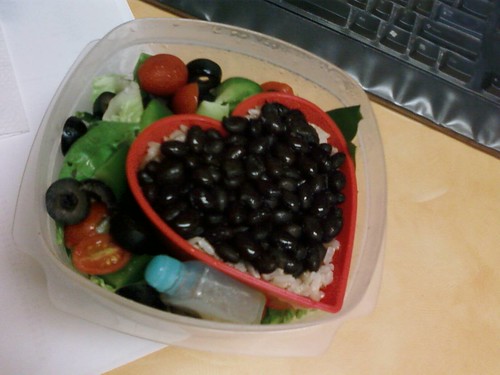 Black beans and rice and a salad

Even thought this is technically my second bento, I like to count it as my first.
Even though I rushed and it's isn't cute T.T
I am posting this to Eat My Bento as well, so if you see it there it isn't a mistake.

I'm sorry about the picture quality; all I had was my camera phone at the time. 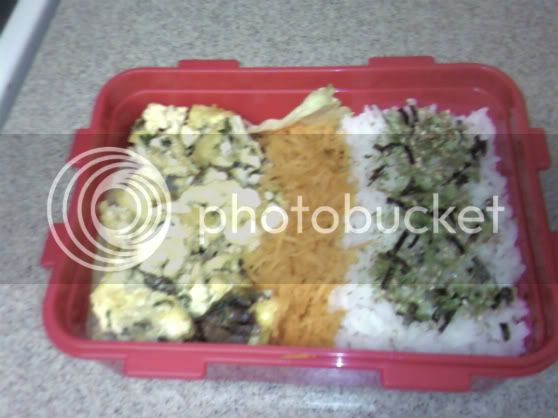 I got bento boxes for my co-worker and myself and made us our first lunches today. :) Here's one: Sauce: mirin, accidental teryaki sauce again, honey, fresh ginger--simmered and reduced. Poured over the chicken and snow peas because sauce bottles haven't arrived yet, definitely wish I'd had those so I could have a bit more control.

onigiri filled and topped with tofu <3

Penguin bento. I used this rather huge (900 ml) box because I packed a lot of fruit and it takes up a lot of space considering its nutritional value. It's filling in the bento but not in the stomach *L*
I then added an egg and some tonkatsu in an attempt of keeping my "poor kid" from dropping dead from starvation the moment she comes home from school ;)

so I was stalking around the last weeks and I found so lovely Bentos in this community. I was impressed by your creativity :) Of course I got hungry and I made my first Bento today. It's a test for tomorrow, because we'll have a company outing. Now I decided to do Bentos for me and my colleagues who are also my friends~

Up - hard boiled egg on a bed of carrots; heart/bunny/bear sandwiches with mayonnaise, ham, salad and cheese; strawberry <3
Down - 2 Onigiri filled with Tuna/Mayonnaise/Wasabi, a Babybel cheese and another yummy strawberry

I liked it :3 I got this adorable Bento Box as a present of my beloved boyfriend. Now I need to make him a Bento, too. ^^ Thank you bf! =D

Have a nice night/day (whereever you live :D)!

Hello all. Here my bento for tomorrow, the empty spot in the bigger (Shaun the Sheep <3) box will be filled with sandwiches in the morning. But since I don't have time in the morning to make pictures etc, some empty space there still.

Close from lower box, closed shot and contents ofcourse behind the ( Collapse ) Just a quick snack for tomorrow, work being pretty hectic due to the upcoming elections. I had a craving for onigiri after seeing all that yummy ones here! A big thank you to

pikkopots  for her heads up on that lovely onigiri box and for the big inspiration for filling it!

My lunch for tomorrow! YAAAAAAAAAAY! You know what I found out? I get weird stares for bringing bento boxes to school. And I go to a culinary school.... Kinda weird but who cares :] I love my bento.

Everything should be self explanitory, a bit of edamame, inari pockets with rice and salmon and garnished with naruto! <3