Hello and thanks to everyone who commented on my first Bento.
I don't find time these days to make Bentos more often, and this one is actually from last week...

this is the bento I made for my youngest on Valentine's weekend.  I was going to post then, but my computer had issues and my camera software was on there to download pics.  Now that it is all better I will be posting my bento pics more often. ;) 2 chicken stock flavored rice onigiri hearts, 4 ham hearts, a star cut out babybel cheese, red grapes and a few carrot sticks.  He was so happy with all his shapes, usually just his rice is shaped. 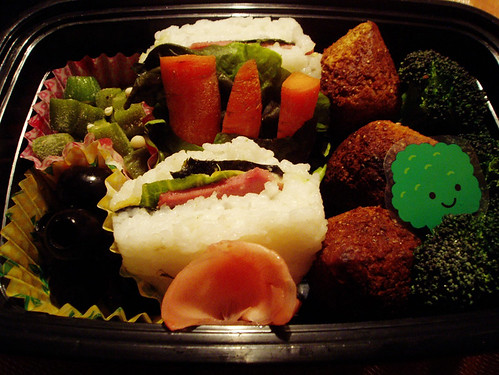 have a great day~
That is my story and I am sticking with it!
I feel soo rundown and tired but I made official bento #3 this morning.
Just some rice, egg with a touch of sugar, small bit of corned beef hash and a little cheese to round it out.
Then a fresh clementine for my fruit.

I need a nap now

PS - and if I was not feeling so lousy I would do my Horshack imitation --
but for those doing the cute thing -- a video on how to make tomato goldfish
http://www.xanga.com/Otoro/693794645/tomato-goldfish/

Yesterday's was just too ugly to post, so I skipped it but today's is postable! 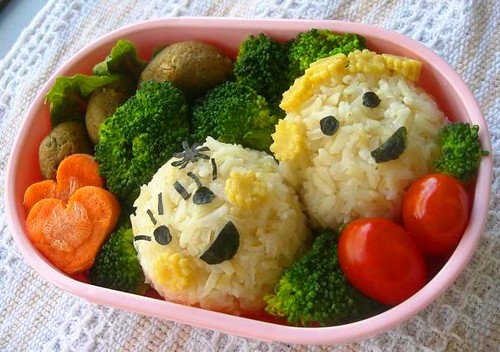 I skipped my morning class today so I was able to make a fun bento.

The lady is made of two bulgogi beef onigiri, her hair is made of tomatoes, her face is made of a tomato and nori, her arms are broccoli stalks and her top is made of sukiyaki furikake. Underneath her is more bulgogi.
The side car is steamed broccoli and zucchini with some tomatoes and pesto sauce for mixing in later on.

I had a lot of fun making this bento. I'd forgotten how fun it is to make kyara-ben.

Thank you to those of you who left comments here and here in relation to my bento straps post. It's interesting that some people even thought that they looked like 'undergarments' in it's deformed state. LOL!!

Anyway, here's another bento post. This one is number 182. I'm closing on to number 200 and I've not thought of what to do yet.
*puts on thinking cap*

On a bento frenzy

Well, I've been off the bentos for about a week now - I got hit by the flu pretty badly and wasn't eating normally. Things still taste funny to me, so the variety you'll see out of me isn't all that impressive.

It's much smaller than what I'm used to (about 400mL instead of the 700mL I should be having), but I'm not planning on staying on campus that long anyway. It's pretty self explanatory: mashed sweet potatoes shaped with a heart cookie cutter (and underneath the meat and veggies), carrots, celery, chicken thigh meat, raspberries, and two little chocolate mint cupcakes. My birthday was on Tuesday, but I finally made my cupcakes last night. :)

I'm not sure if I'm up to the raspberries yet, but we'll see.


I also finally took a picture of the bento supplies I have amassed.

I see that I'm not the only one around here who is sick. Feel better, my bentoing friends!

I completely forgot we had these! My mother bought them many years ago at a market and they've been sitting in the pantry forever.

On the left : Turkey with fennel, onions and lemon with some black sesame seeds to add color. Brown rice with my favorite furikake lately - nori, bonito, sesame seeds and egg.
On the right: Simple mixed greens salad with tomato, yelllow peppers and radishes.

On a completely unrelated note, I am SOOOOOOOO ready for Spring. Anyone have any magic time-accelerating fairy dust?

Also, for actual bento-related rants and recipes, check out my blog: http://bento4lunch.blogspot.com/ Havent been to well recently so cant eat too much now :( getting better as today is a two tier bento! whoooo

Only a few days left to enter my Furikake Frenzy drawing! :D

Today I'm having leftover meat loaf. Read about how I put this together on my blog. 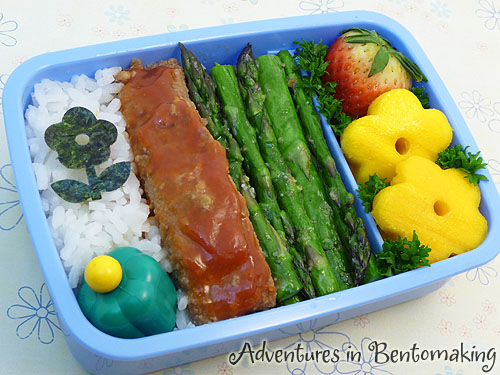 I remember someone asking if anyone was observing Lent this year, so I figured I'd put these two in a different post.

For Lent this year, I have decided to go back onto Phase 1 of South Beach, and merge into Phase 2 after 2 or 3 weeks. That means I have to cut out all breads, potatoes, rice and other grains, pasta, fruit, and sugar from my system, as well as carrots and corn for at least 2 weeks.

For Ash Wednesday, I tried to go vegetarian, because I have to be in the mood for fish these days.
Result: I'd make a very bad vegetarian, and ended up making a bowl of tuna salad for supper, but I didn't eat "meat", so I succeeded in that. I give major props to all of you vegetarians and vegans. I will not be "Fasting" on Fridays, because only being able to eat seafood in Southern Louisiana is NOT penance. (That and I'm not Catholic, so while I was raised celebrating Lent, my mom was pretty casual about Fridays.) I should have included more cucumbers and some hummus for this to be more filling than it was. Lesson learned.

I usually make my bentos very late at night, so i never have any pictures with natural light. This is the first one that was made in the morning. 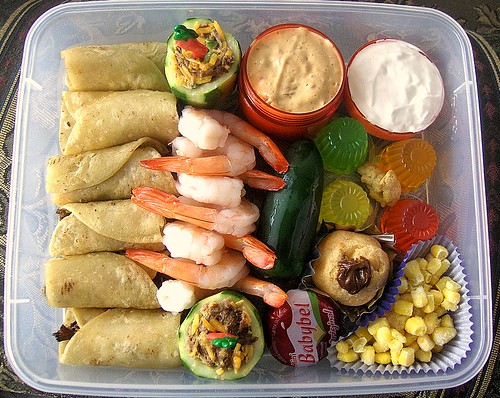 And my "Mardi Gras Cake" 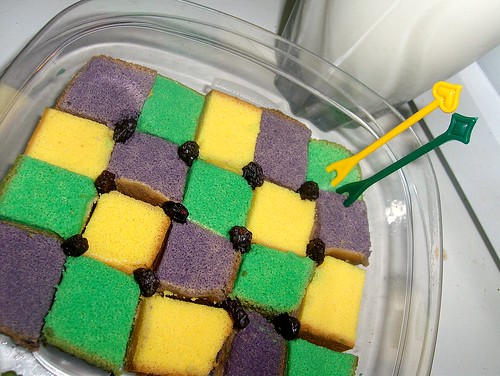 A fairly simple bento today with one of my favorite taste combos - portobello mushroom, feta & spinach - YUM!!!  Here's the box:

I've had a shitty week so far, so when I came home from class today I decided to make myself a bento, which I promptly devoured.

Much of it is inspired by foods I loved when I was a kid.

*An Avalance is something I get from a chocolate shop in my town. It's a rice square with whipped peanut butter, marshmallows, and chocolate chips.

another simple meal - hamburger, some broccoli cooked with it, rice, raw carrots and a ladys apple

I've been rubbish as ever with getting bento done lately, never mind posting them! XD Here's one from last week: Not much to say about this one, really. I had the urge to make up for the last two day's boring looking (albeit tasty) bentos with a little elaborateness. And I guess I went a little overboard...